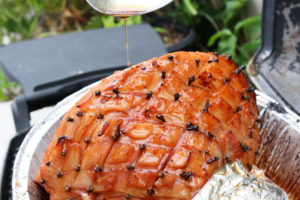 There is nothing better than glazing a ham on the BBQ! Not only does it create extra flavour when glazed on the BBQ, but it’s also super easy to do. That’s right, EASY! You will only need 3 ingredients for the glaze and 2 hours on the BBQ (basting every 20 minutes).

How to select the BEST ham

Firstly, you need to make sure your ham will fit on the BBQ. When you purchase a ham, it is already cooked, and you can eat it straight away, but glazing it before serving adds to the flavour and makes for an amazing centrepiece. You will want to select a ham with a little fat for flavour, especially when glazing it on the BBQ. Each year, I buy my half leg ham from Woolworths when doing my Christmas food shop, making it easy to get everything in one shop.

Here are a few cuts of ham that are available at Woolworths, which can all be glazed on the BBQ.

Woolworths Half Leg Ham ( The ham I have used in this recipe)
Award winning juicy and succulent ham that’s been naturally wood smoked for a richer flavour.

How to prepare and cook your ham on the BBQ

How to store your ham

2 words, ham bag! The ham bag will keep your ham fresh for up to 14 days when used correctly. Rinse your ham bag and allow it to soak in 3 cups water and 3 tablespoons of vinegar, and squeeze out the bag. You will need to repeat these steps every 2-3 days to keep your ham fresh.

If you glaze your ham on the BBQ this year, tag me over at @ohsobusymum and @Woolworths_au.

I can’t wait to see them!